Declamations is an annual assembly that gives 11th grade students the chance to take a risk in front of their peers, teachers and families, to exhibit the speaking skills they have refined during their high school years and, most importantly, to express their passion for a work of literature.

The tradition of Declamations has been honored for over fifty years at the American Overseas School of Rome. It has transformed over the years but the spirit and tremendous importance of the event has remained.

Each student in the junior class (grade 11) selects a passage that connects with the year's guiding inspiration. After weeks of preparation and memorization, they presented their choices for their English teachers and class. 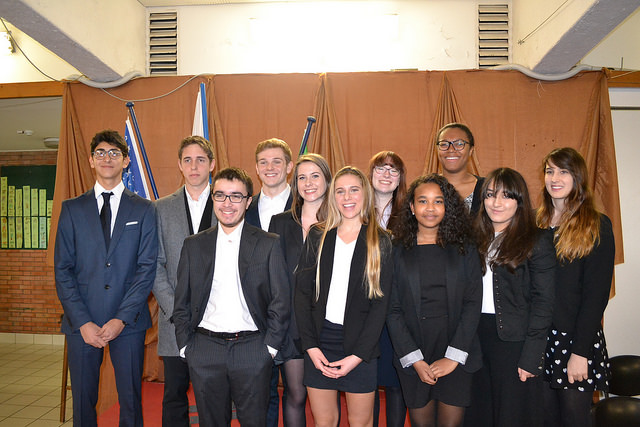 From this initial recitation, 10 finalists are chosen and they present their pieces for the high school in an assembly that would ultimately yield the final winner of the contest.

Students learn their beloved texts by heart and are evaluated on four criteria:

The judges are always AOSR staff and faculty that are also alumni of the school, along with the winner from the previous year.

Our final winner was Nikol Niko D. with her excerpt from BAFTA Screenwriters' Lecture by Charlie Kaufman: "To be nobody but yourself in a world which is doing its best night and day to make you everybody else means to fight the hardest battle which any human being can fight, and never stop fighting."

Our final winner was Lucrezia B. with her riveting presentation of activist Mary Fisher's moving speech, "A Whisper of AIDS". 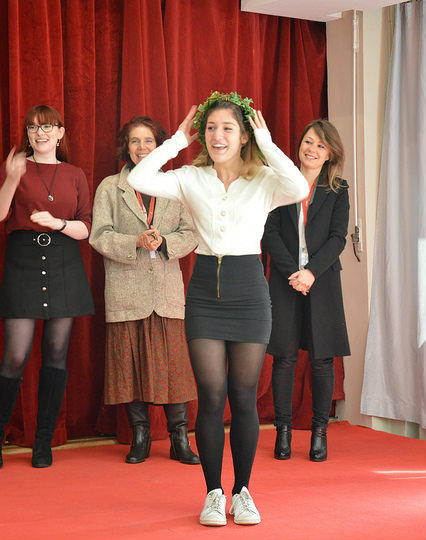 The first time I attended a Declamations ceremony was in 9th grade, when I had no idea of what it was and what it stood for. The year after that, I learned about its tradition in our school and how students strive for that laurel so to be called the winners of AOSR's legacy. While listening to the 2015 finalists I thought to myself, "How can one act using only her or his voice? How can performances be so powerful without the use of body language? However they do it, when it is my time, I also want to be called on that stage". But for me it was not a matter of victory and tradition, it was about moving the audience through the power of story-telling.

The interesting part of this is that I believe my oratory skills are not outstanding, on the contrary, I always feel like I am stumbling when I speak and that my diction is limited. But on that stage, the pressure and anxiety vanished as soon as I heard the words flowing smoothly. I felt confident because the words felt right and suddenty my self-judgement was gone.

Our final winner was Anna C. with her excerpt from "How to Live with Someone Who Can't" by Antonella Gonzalez. 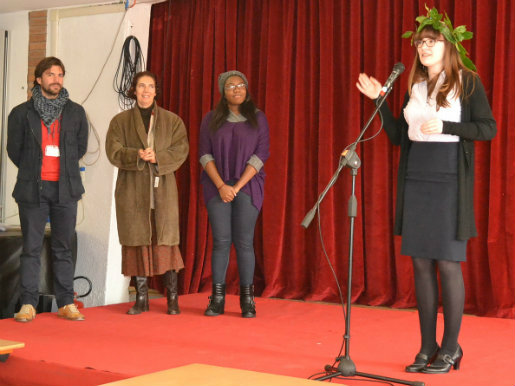 "Declamations were an incredible and unique experience, one I may not have again for a very long time. Being able to present a piece of work that I very deeply connected with, and share that connection with my audience was an amazing feeling. It was truly an honor to be a part of a tradition that encourages students to get out of their comfort zone, and try something that they may not have had a chance to do before."

Testimonials from the Audience

As an audience member, I was wowed by the final presentations given in this year’s Declamations. Moreover, as their teacher I can tell you that their preparation, and their deep understanding of their chosen pieces, are equally impressive.

In American Literature and AP Literature, students used their chosen declamation pieces for exercises in close reading, and analysis of a writer’s purpose. Students diagrammed the rhetorical structure on an Arc of Intensity, analyzing the way the author uses language and form to create a dynamic message. They also analyzed the tone of the piece through a unit on Shades of Hope, identifying a more specific type of “hope” being expressed in their declamation pieces, from aspiration, to desire, from dream, to expectation. This culminated in writing an “Expression of Hope” essay in which students analyzed the “shade of hope” being expressed by the author, as well as the ways in which they would share this as presenters.

Declamations of Years Past